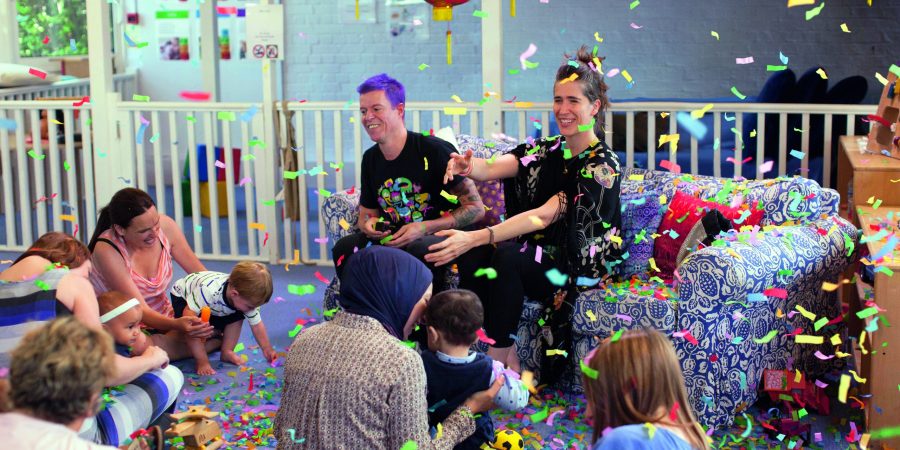 How two psychologists and an army of babies helped Grammy winner Imogen Heap to write her new happy song for babies.

Being a new parent is an emotional rollercoaster. It is an even wilder ride for a baby. Baby experts often focus on coping with lows. As someone who studies infant psychology I think the highs are no less interesting. So for the last four years I’ve been researching baby laughter. Can I guarantee to make a baby laugh? Well, I’ve been working on it.

I conducted a survey of parents all over the world and have run various studies in the lab. I’ve come to see infant laughter as the flipside to all those tears. Crying and laughter are both social signals that let babies communicate with us. Crying is a signal of frustration and discomfort, laughter signals success and satisfaction. Laughs accompany each tiny triumph and each little “Eureka!”. This makes infant laughter a wonderful window into infant learning. In fact, laughter may be a tool babies use to learn about the social world.

It’s clear that a crying baby needs your help. What is less obvious is that a laughing baby is rewarding your assistance and holding your attention in order to learn from you. The biggest mystery in anyone’s life is other people. This is even more true for babies. They crave quality interactions with adults. Laughter is their secret weapon to get it. This is why laughing babies pull in hundreds of millions of views on YouTube. It also why one of the best ways to make a baby laugh is to take her seriously.

Now, if only more people would take this research seriously I might have funding to do it. Fortunately, last year I started a new job at Goldsmiths, University of London; a place with a reputation for encouraging radical ideas and creative approaches to research. (I always suspect that having blue hair may have helped me get the job.)

Shortly after I arrived I gave a talk to my new department about my research. Straight after the talk Prof. Lauren Stewart came up to me and suggested we collaborate on something. Lauren is a professor of the psychology of music and was interested in how babies respond to music. Music is laden with emotion and so it would be fascinating to learn more about its effect on young babies. I readily agreed but couldn’t find a suitable project.

Then by weird and happy coincidence in April last year C&G baby club called Lauren up saying they wanted help to create ‘a song scientifically proven to make babies happy’. At first we were wary. Brands have a fairly poor track record when it comes to using science. However, I had previously had a very positive experience doing research funded by Pampers. I had seen that baby brands cannot afford to lose their credibility and so have to be assiduous in what they do and what they claim. We met with C&G baby club to discuss their intentions. Our first proviso was that they shouldn’t use the word ‘prove’. Our second was that they had let us do real science. They readily agreed.

Once these ground rules were established the first step was to discover what was already known about the sounds and music that might make babies happy. We had some experience. My previous work on the Baby Laughter project had asked parents about the nursery rhymes and silly sounds that appealed to babies. Lauren’s previous research has looked at ‘earworms’, songs that get stuck in your head. We discovered surprisingly little research on babies’ musical preferences. This was encouraging as it meant this was a worthwhile project from a scientific point of view.

The next step was to find the right composer. With the help of FELT music consultancy, Grammy winner Imogen Heap was recruited as the composer. Imogen is a highly tech-savvy musician who just happened to have an 18 month old daughter of her own. She was intrigued by the challenges of the project. Few musicians had taken on the challenge of writing real music to excite babies while still appealing to parents. Musician Michael Janisch recorded a whole album of Jazz for Babies, but that was very slow and designed to soothe babies. Most music written specifically for babies sounds frankly deranged.

Plenty of research has looked at adults’ emotional response to music (such as the recent brain imaging study of Tinie Tempah). Research with babies is more piecemeal and eclectic, perhaps reflecting the difficulty of asking them what they like. Researchers know that babies can hear and remember music even while they are still in the womb and one curious study from 2000 found that newborn babies prefer Bach to Aerosmith. Most systematic work has been conducted by Laurel Trainor at McMaster University and her colleagues. She has found young babies have clear preferences for consonance over dissonance and can remember the tempo and timbre of music they’ve heard before. Babies prefer the female voice but like it even more when it takes on the high-energy sing-song tone of ‘motherese’. More accurately known as ‘Infant Directed Speech’ as it is a style we all naturally adopt when talking to babies.

We met with Imogen and gave her a set of recommendations based on what we had discovered.The song ought to be in an major key with a simple and repetitive main melody with musical devices like drum rolls, key changes and rising pitch glides to provide opportunities for anticipation and surprise. Because babies’ heart rates are much faster than ours so the music ought to be more up-tempo than we would expect. And finally, it should have an energetic female vocal, ideally recorded in the presence of an actual baby.

Fortunately Imogen had her daughter, Scout, to help her with the composition. Imogen created 4 melodies for us to test in the lab, 2 fast and 2 slow ones. For each of these she created a version with and without simple sung lyrics. Twenty-six babies between 6 and 12 months came to our lab with their mums and dads to give us their opinion on these 8 short pieces of music. Amazingly most of the parents and 20 out of 26 babies seemed to share a clear preference for one particular melody. In line with our predictions this was a faster melody. Even more amazingly, this is was the tune that had started out as a little ditty made up by Scout.

We knew which song the parents liked because we could ask them. We also asked the parents to tell us what their babies preferred best, because they are the experts on their own babies. But we also filmed the babies’ responses and coded the videos for laughs, smiles and dancing. We tried measuring changes in the babies’ heart rates and using a motion capture system to see if they were moving in time with the music. Unfortunately, this hit quite a few technical difficulties and there wasn’t time to solve the problems on our very tight schedule. This was worthwhile as pilot work and will be a really interesting area for future research.

But now we had a winning melody, Imogen needed to turn it into a full length song and it needed to be funny (to a baby). The secret was to make it silly and make it social. Around 2500 parents from the C&G baby club and Imogen’s fan club voted on silly sounds that made their babies happy. The top 10 sounds included “Boo!” (66%), raspberries (57%), sneezing (51%), animal sounds (23%) and baby laughter (28%). We also know babies respond better to plosive vocal sounds like “pa” and “ba” compared to sonorant sounds like “la”. Imogen very cleverly worked many of these elements into the song.

Next it needed to be something that parents could enjoy themselves and share with their children. Happiness is a shared emotion and the success of nursery rhymes is that they are interactive. Imogen carefully crafted the lyrics to tell a joyous tale of how we love our little babies wherever we are — from the sky to the ocean, on a bike or on a rocket. The transport theme permitted lots of plosives “Beep, beep” and bouncing actions.

Our baby music consultants came back to the lab and listened to two slightly different sketches of the full song. This time we found that slightly slower seemed to work better (163 vs 168 beats per minute). Perhaps because it gave parents and babies a little more time to respond to the lyrics. We also found that the chorus was the most effective part of the song and determined which lyrics and sound effects worked better or worse.

After one final round of tweaks from Imogen, we went for a different kind of test. We assembled about 20 of the babies in one room and played them the song all together. It was perhaps a silly thing to do but as Imogen and I sat on the sofa in front of a colourful and chaotic room full of parents and babies and pressed play we were cautiously optimistic. If you ever met an excited toddler or young baby, you will know that 2 ½ minutes is a long time to hold the attention of even one child, let alone two dozen. When The Happy Song played we were met by a sea of entranced little faces. This certainly wasn’t very scientific as tests go but it definitely convinced me that we had a hit on our hands. You can hear the song here. Please tweet me (@czzpr) and let us know if it makes your little ones happy too.

Thanks to all the mums, dads and babies who helped with the project. We couldn’t have done it without our small army of tiny music consultants. Nor without my two assistants Omer and Kaveesha who came to us through the excellent Nuffield Brilliant Club which arranges internships for A-level student in real working science labs. It was a frantic summer but we are very happy with the final song. You see a short video about the process here:

Now that we have a song that both novel and highly baby friendly, Lauren and I have a range of follow up studies planned. We are planning to use the song in a range of experiments looking at how mothers introduce their babies to music and hope to look properly at babies physiological responses to happy music. Meanwhile, I am finishing a popular science book called the Laughing Baby. It is all about how to make babies happy and why that is so important. You can preorder your copy here https://unbound.com/books/the-laughing-baby

Caspar Addyman is a Lecturer in Psychology, Goldsmiths, University of London. He previously spent 10 years working at Birkbeck Babylab. Caspar is a specialist in baby psychology with a particular interest in positive emotions in infancy. His book The Laughing Baby is published by Unbound in April 2020.