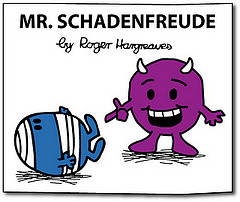 Our latest video comes from Diana and shows baby Ciera laughing as her twin brother Cole face plants the floor as he reaches for her bouncer. Ciera and Cole are just 1 year old in this video so it probably seems unlikely to you that Ciera’s laughter is a form of schadenfreude (pleasure derived from the misfortune of others). Sigmund Freud thought it was. But, not for the first time, Freud got it completely wrong.

Freud thought that almost all children’s laughter was a form of schadenfreude. In his 1905 book Jokes and their Relation to the Unconscious he advanced the theory that children laugh at someone falling over primarily because they are glad it wasn’t them. He does admit that children can laugh from pure pleasure but he thinks that generally ‘children are without a feeling for the comic’ (p288 Freud, 1905) and that most of their laughter comes from a rare sense of superiority when someone makes a mistake they’re glad they didn’t make themselves.

This is a very paternalistic attitude to childhood. Firstly, children are not so self-conscious or even aware of their own limitations. Secondly, it is wrong to think that children’s natural reaction to someone-else’s misfortune would be negative. It’s a common misconception but recent research suggests that young children and even babies are actually empathic and moral. As developmental psychologist Nathalia Gjersoe says in her recent Guardian column:

If you have any experience of babies you’d be forgiven for thinking of them as entirely selfish, self-oriented little beasts with scant regard for others. It has long been thought that children are born amoral and that it is the job of their culture to teach them the difference between good and bad. However, studies with very young babies suggest that they might be much nicer than we previously thought. For instance, babies seem to empathize with the distress of others – crying in response to the cries of other babies and stroking or offering toys to those who seem to be upset. Babies also spontaneously help strangers who are struggling. The Moral Life of Babies (Guardian Online)

So the chances are that the first reaction of a baby to someone falling over would be one of concern. But if that were the case then why is Ceira laughing at her unfortunate brother? To be honest, I don’t think anybody really knows the real answer. For Ceira it might just be surprise. Possibly it is relief that he isn’t hurt; we rarely laugh if the accident looks serious.

Ultimately, there aren’t any fully convincing answers at the moment as to why babies or adults find falls and slapstick so amusing. We clearly do. IT is amazing (and slightly disturbing) quite how many videos of babies faceplanting there are on youtube. It seems it is not just Ciera who finds it funny. In the same book Freud also said that ‘children do not strike us in any way comic’ (p287 Freud 1905). As all these videos show he couldn’t be more wrong about that!