Why I study laughing babies 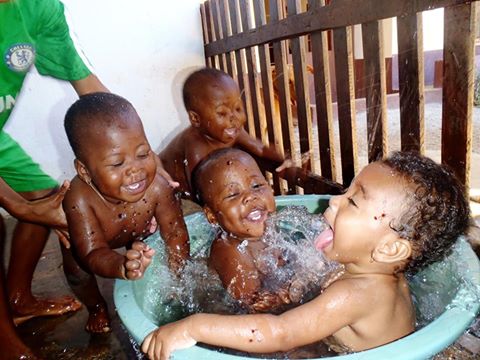 Why I study laughing babies

Since 2012, I have been studying laughing babies. The question I am most often asked—frequently accompanied by incredulous laughter—is “Why?” And sometimes, “Wouldn’t it be better to study what makes them cry?”

When people look at my job as a baby scientist, they imagine that my goal is to help new parents get everything right. Even if that were possible, that’s not what we’re trying to do. Baby scientists study humanity through the eyes of infancy—and I study baby laughter because it’s at the heart of what makes us human.

My “proper” job title is “developmental psychologist.” I started studying babies because it seemed like the best place to start in psychology. The foundation of everything we become is laid in the womb and those frenetic first two years. I was interested in the origins of language, thought, intelligence, and consciousness. Those were all very big and difficult topics, so it seemed wise to start with baby steps.

Starting my Ph.D. in 2005, I investigated the origins of abstract ideas like “sameness” and “difference.” I then worked on two projects that looked at the very beginning of speech comprehension and how our brains develop a sense of time. All of these studies involved parents coming to our lab and their babies playing little games we invented to test their understanding of the world.

These encounters led me to baby laughter. Babies treated our studies as delightful games and they played with intense concentration. I wondered if their enjoyment might give clues about what they were thinking.

Infant psychology was already built on this assumption. Two of our main methods involve surprising babies. In habituation studies, we show them similar things repeatedly until they are bored and then change a crucial detail to see if they perk up. If after 10 pictures of a female face, they perk up when they see a male face, they know something is different. Remarkably, three-month-olds already notice this subtle difference and it was a question we couldn’t easily ask them any other way (see Quinn et al. 2002).

Laughter seemed like another approach to understanding. Babies won’t laugh if they don’t get the joke.

But once I started studying laughter, I realised this wasn’t the most important thing about it. The main things that make babies laugh are not things. They’re other people. Baby laughter is intensely social. It is an invitation for you to engage with the baby. It encourages you to keep playing a game. And often the best bit of that game is the fact that you are playing.

One of the central things babies have to learn about is other people. Laughing with you helps them do so. We see this most clearly in peekaboo, which, my research found, was the best way to make babies laugh all over the world. It is also Social Interaction 101—a conversation that even preverbal babies can understand, participate in, and enjoy.

Realising this made me change the focus of my own research. I became less interested in the cognitive side of development and started to look more at the social and emotional side of infancy. You might say that I moved from thoughts to feelings. Those are a lot harder to study, but baby laughter helped me see I was on the right path. Laughter shows that babies really enjoy being babies.

As adults, we can be distant from that magic and joy. We can see it in children’s faces. But rarely do we go inside their experience. How wonderful and terrifying the world seems to them. Laughter is the sign that—despite everything—they are thriving. It invites frazzled parents to share the triumphs and rewards them for their love and attention. These are all key elements of successful development and it has been interesting to try and uncover. I sometimes call this “positive psychology for babies.”

What have I learned? Well, it would take a whole book to answer that. And, as luck would have it, I have just written one. The Laughing Baby was published by Unbound in the U.K. in April 2020 and the U.S. edition comes out in May. It covers all the important things that babies must learn in the first two years and shows how shared joy and laughter are an essential thread running through that whole time. Over the coming months, I will be posting extracts here and sharing more of the cutest science in the universe.