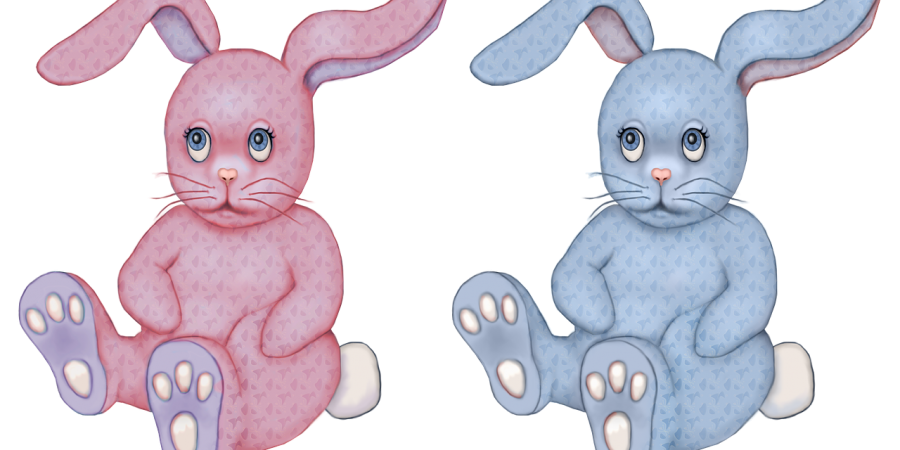 A few years ago, I did a science show for babies and their parents called the Joys of Toys. In the show, 24 babies each got their own small toy box and parents were encouraged to take toys as we directed them. In one experiment comparing cars and animals. I bought 80 assorted toy cars from eBay and several dozen small soft toy animals; teddies, rabbits, badgers, hippos and something the manufacturer insisted was a warthog (a friendly blue warthog). We asked the parents to put a toy car next to soft toy rabbit and see which one each baby lunged for. We wondered if girls would go for the soft toy and the boys for the cars.

We also wondered if it was a good idea to even run our ‘experiment’. We genuinely had no idea what to expect. Gender preferences are scientifically mysterious. For a long time, it was taken for granted that boys and girls are different beasts but the more scientists investigate it, the less clear the differences become. This does not stop people having strong opinions on what is ‘obvious’ or ‘natural’. Lots of people seem threatened by even the suggestion of uncertainty.

The campaign Let Toys Be Toys started in 2012 with the very reasonable aim of getting shops to label toys by function rather than gender. Since the late 1980s toy manufacturers have increasingly segregated toys by gender, sometimes even making pink and blue versions of the same toys. More disturbing when the types of toys get divided by gender it restricts the toys that children have access to. Let Toys Be Toys is not asking manufacturers to stop making dolls or soldiers. They just want the marketing and sales to move away from the rigid reinforcement of stereotypes. On their website, LetToysBeToys.org.uk, they make the point very simply:

Whenever the campaign features in the press there is no shortage of angry comments that “boys should be boys” and “what is wrong with little girls liking pink?” and of course, “It is political correctness gone mad.”

In our tiny, chaotic experiments at the Joys of Toys there was no pattern at all. But there is no question that on average schoolboys prefer cars and fighting and schoolgirls prefer dolls and caring. Brenda Todd and colleagues recently completed a very detailed survey of all literature on children’s toy preferences. In a meta-analysis of 16 well-controlled studies conducted since 1980 they found strong gender based preferences in children between 12 months and 8 years old (Todd et al., 2017). Interestingly, that analysis found that boys become more stereotyped in their choices as they get older but girls did not. Stereotypes were weaker in more recent studies than older ones suggesting a trend towards greater egalitarianism.

Where do these preferences come from? This is a very difficult question to answer. By eight years old children have been exposed to many years cultural pressures, not least from other children. This is true even by 12 months. The first question parents used to ask at birth was “Is it a boy or a girl?” Nowadays, they may already know that several months before birth.  Once babies get labelled as boys or girls, we tend to treat them differently and the differences are a lot more pervasive than pink or blue clothes.

Once upon a time, a baby named X was born. This baby was named X so that nobody could tell whether it was a boy or a girl. Its parents could tell, of course, but they couldn’t tell anybody else. They couldn’t even tell Baby X at first.

A whole class of experiments have studied our weird need to gender stereotype babies. These get labelled “Baby X” studies. The name comes from Lois Gould’s science fiction short story, published in Ms. magazine in 1972. In the story, a lavishly funded Xperiment follows Baby X all the way through infancy and school. X’s parents regularly consult a giant instruction manual that covered everything from how to dress X, what toys to buy and how cope with questions from curious strangers to which bathroom X should use at school. (The solution was to use the principle’s bathroom which was just labelled bathroom.) The story was optimistic and X’s school friends quickly accept them as they are and start to follow suit adopting X’s genderless ways. This upsets other parents and then… well… I will not spoil it for you.

Although inspired by Lois Gould’s story the first real experiment was a bit more modest in scope. It was run by Carol Seavey and colleagues in New York in 1975. Forty-two participants, half of them female, each spent just 3 minutes interacting with a three-month-old baby in a neutral yellow babygrow. They were given a doll, a small football and rubber ring and were told to play naturally with the baby so that researchers could study the infant’s response to strangers. The baby happened to be female but participants were told to a baby boy, a baby girl or a baby. The pattern of results was complex but encouraging. Overall, adults did stereotype the baby based on the label but not strongly and they did not differ in the warmth or affection shown towards it (Seavey, Katz, & Zalk, 1975).

Several similar studies found that prevailing cultural norms were projected onto babies labelled male or female. But the effects were weak and inconsistent (Stern & Karraker, 1989). It not clear how well these 3 minute long interactions represent what children experience in their home environment. Nor does this tell us anything about how children respond to gender role socialization. As in the story of baby X, parents do know the sex of their own child and they interact with that child every day. It is entirely possible that gender stereotypes are self-fulfilling prophecy, children and babies adopting the behaviours in line with their parents’ expectations.

Of course, no parent believes this. Every child will surprise you. Each child turns out differently in the same family. The personalities of older brothers and sisters provide little clue to the what to expect from a new arrival of either gender. Chances are the younger ones have all the baby toys of their older siblings, pink and blue. They will make their own choices, with genes and environment adding to the mix.

There is curious evidence from monkeys that some toy preferences are genetic. Female vervet monkeys make more contact with a doll and a cooking pot than males do, whereas males spend longer than females manipulating a car and a ball (Alexander & Hines, 2002) and male rhesus monkeys prefer wheeled over non-wheeled plush toys while females had no preference (Hassett, Siebert, & Wallen, 2008). Scientists speculate that cars and balls attract the male animals because of the actions they enable and their interesting geometry. Alexander and Hines speculate that the female vervet monkeys were play cooking games because the pot was red. Some female monkeys had previously been shown to prefer pinks and reds to blues and greens. The theory being that it is a biological programmed preference that makes them respond nurturingly to the adorable pink faces of baby monkeys. To my knowledge no-one has suggested the same applies to humans but it would not necessarily effect babies toys preferences as girls’ preferences for pink only emerges from 2 years old onwards (LoBue & DeLoache, 2011) .

My friend Claire is raising her young children SJ and Phoenix in a gender-neutral way. Claire has avoided telling friends the biological sex of her children and uses the neutral pronoun “they” when talking about them. When SJ, the older of the two, was born Claire lived in highly conservative state of Alabama which made it doubly difficult. But she says “even in Alabama, a lot of people were very supportive.” They recognise that it is an important issue for her. “I have a lot of transgender friends,” Claire explains, “so I am very aware that gender is not the same thing as biological sex. SJ does not know their own gender yet, they are just baby.”

When Claire came home to the UK to give birth to Phoenix the reception was even more positive. “The second time we went to the health centre Phoenix was already a little celebrity, all the staff wanted to meet them and practice using ‘they’ and ‘them’ when talking to us.”

When SJ was coming up for their first birthday. I was wondering what present to send. In Lois Gould’s story, when X goes to school other children ask them what their favourite toy was in the hope of working out if X was a girl or a boy. X tells them that it was a doll but also that the doll was a robot. On hearing this the other children forget their original agenda, they are more interested in the toy than in gender politics. For SJ, I opt for a bright yellow duck but I notice that even for little babies many things come in pink or blue. Clothing can be even more tyrannical than toys, blue and pink are just two of the colours in rainbow of Claire’s children’s wardrobes. But has take extra effort and Claire gets frustrated with this,

“by consciously trying to do the right thing, you really not just how many unconscious biases we project on to tiny babies.“

We should let toys be toys and let babies be babies.